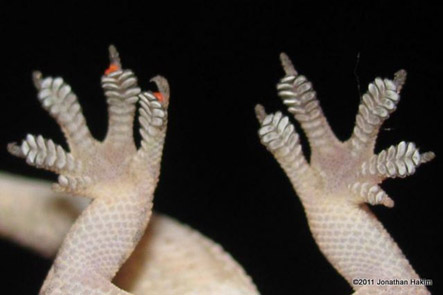 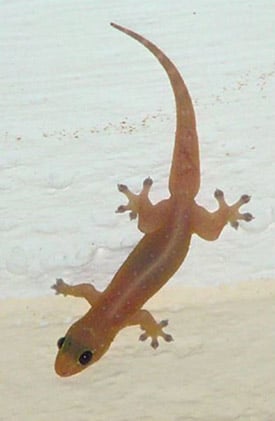 The common house lizard, Hemidactylus frenatus, has a triangular head, and large eyes without eyelids.

The common house lizard is one of the most frequently encountered vertebrates in our homes and workplaces. This little creature, native to Asia, is mostly found in urban areas. Being arboreal, it lives mostly at heights greater than one meter. Surprisingly, this seemingly drab creature does have some bizarre characteristics!

The house lizard grows to about 7.5 - 15 cm long, with males generally larger than females. Its triangular head holds large eyes without eyelids. It feeds on small insects and spiders, which it catches using its prehensile (capable of grasping) tongue. Males produce a ‘take sound to attract females for mating. Each female lays 1-2 eggs at a time. However, it is interesting to note that females can store sperm in their bodies for up to one year!

The house lizard is most active in the evenings. It hunts near lights that attract insects. One well-known fact of the house lizard is the ability to lose its tail when alarmed. This acts as a distraction for the predator, while the lizard makes its safe escape.

The lizard’s ability to climb walls and ceilings is due to its adhesive toe pads and enlarged claws. The pads create a suction force, enabling a lizard to climb on walls and even crawl upside down.

A house lizard’s foot consists of toe pads with minute hooks, producing a suction force that enables it to climb walls and crawl on ceilings. Photo credit: https://taxo4254.wikispaces.com/Hemidactylus+frenatus

Management of lizards in pharmaceutical industries

The presence of house lizards is often associated with unsanitary conditions. Besides being unsightly, the fecal matter of house lizards may contain Salmonella, which can cause gastrointestinal infections. Thus, the management of lizards, especially in sensitive areas such as medicine production lines, is of critical importance.

The best way to control lizards would be to control their prey, insects. Proper management of insects such as moths and houseflies would lead to the absence of lizards too. Additionally, door seals or door brushes can be installed at gaps between doors and doorframes, to keep lizards from coming in (More information on door seals can be found on page 4). Reducing outdoor lighting at night may also be helpful.

Glue boards are also effective traps, as the lizard’s adhesive toe pads cause it to easily get stuck on sticky surfaces. Glue boards can be installed in corners along walls.

Glueboards placed on the corners of walls can trap lizards effectively.

Residual spraying can also keep lizards at bay. Many lizard repellents contain natural substances such as lemongrass oil and oleic acid, thus deterring lizards without being an environmental hazard.

If you need more advice on lizard management in your premises, Origin would be eager to share our expertise and knowledge with you. 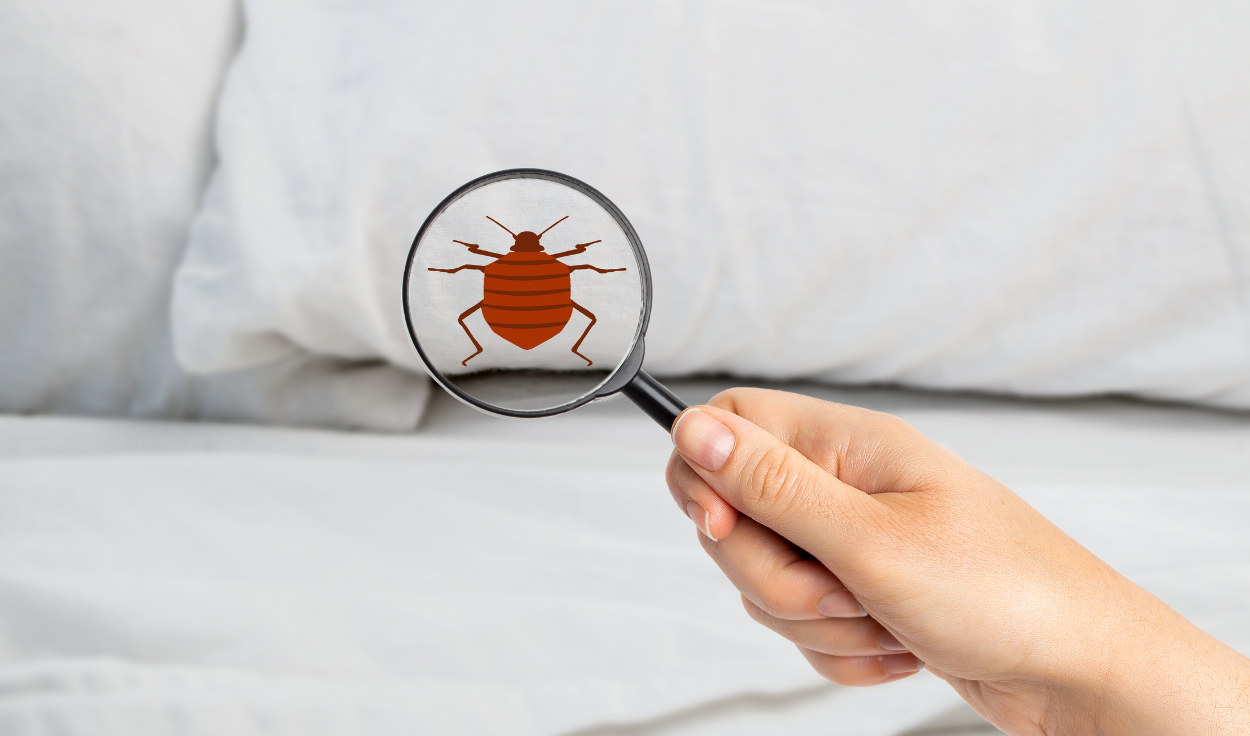